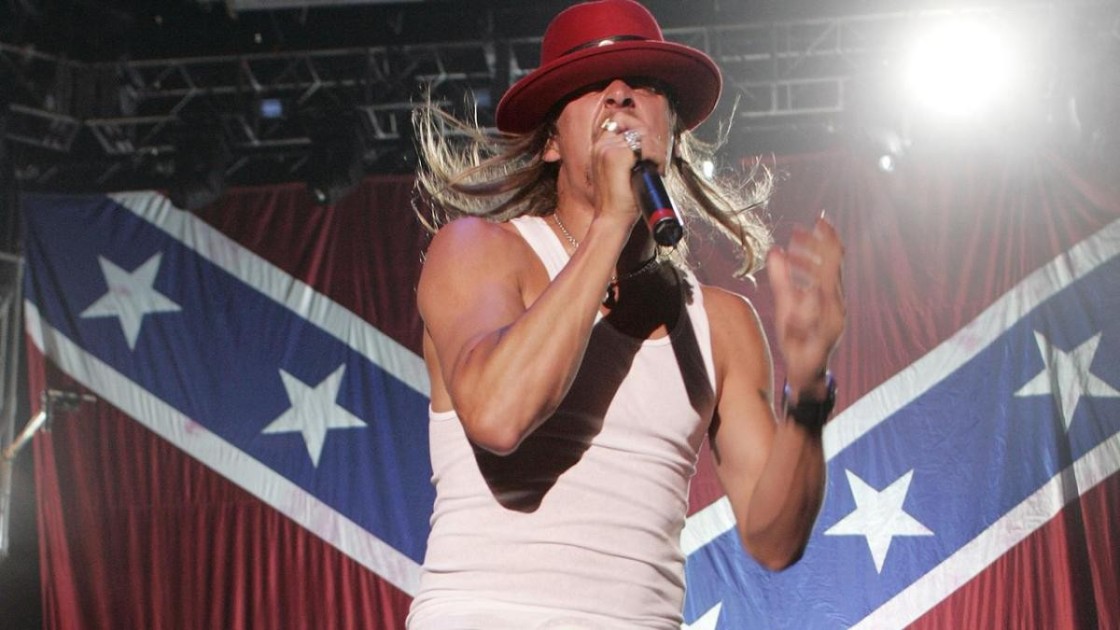 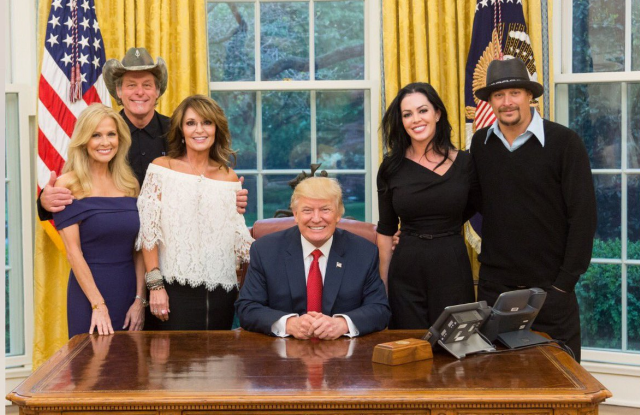 A few weekends ago, I had the rare delight of experiencing Kid Rock’s headline show inaugurating Detroit’s Little Caesar’s Stadium. I knew that I was attending the show months in advance – months before his Kid Rock 4 Senate campaign began and even before I found out about his public support of President Trump. I know, sis… still no excuses… just keep reading.

Truth be told, I knew barely anything about the artist besides the fact that he appeared on Run’s House in the early 2000’s (coincidentally wearing an “I Heart Black People” tee – Little Russy’s face says it all) and that my fiance’s family plays some of his tracks at their family gatherings (The Get Out joke has already gotten old).

Clearly I didn’t have too much of an opinion prior to attending the show. It was a free concert, I’d never been to Detroit, and I was going with three people who just so happened to grow up attending the shows.

Then the shit got started.

Videos of Kid Rock’s opening campaign speech (if it could be called that) hit the interwebs and black Twitter officially revoked Mr. Rock’s invitation to the cookout.

My anxiety was at an all time high. I knew that on Saturday night, I’d be sitting through the speech, hearing Kid Rock’s rallying cries against Kaepernick’s decision to kneel whilst concertgoers in red hats cheered him on. I knew that I’d be one of only a few black people listening while the once-poor rockstar denounced “lazy, no good” welfare recipients (let’s be real, we know which lazy, no good recipients his fans were tired of). I also knew that I’m not one to take things lightly – this loud mouth and unwavering confidence is something that’s gotten me into trouble before. I still went.

My issue with going to the show wasn’t even sitting through the mockery of a campaign speech. I couldn’t necessarily be mad at his public political stance because my favorite artist of all time, Kanye West, has had his fair share of problematic messaging both on and off the stage.

But let’s be clear: Black Twitter’s revocation of Kid Rock’s cookout invitation wasn’t because of the simple fact that Kid Rock is clearly more “racial” than we thought. It’s because he built his fame and following through his appreciation and appropriation of black culture (break dancing/DJing/rapping) but then seemingly abandoned the people he claimed to love and support through his current political viewpoints. As a wise man once said, “America loves black culture but hates black people.” No, Kid Rock has never outwardly stated that he hates black people. His die hard fans love to spout the ultimate Kid-Rock-ain’t-racist-fun-fact, “he had a baby with a black woman, he can’t be racist!” The truth of the matter is, Kid Rock supports the conservative programs and agendas that overwhelmingly negatively affect the majority of those in black communities. Even more, whether his campaign speech was a joke or not, it further encourages the bigotry and hate drawn from the ultra-conservative Trump supporters that attend his shows. This makes him a part of the problem.

While we’re on the topic, the show’s fan base was a phenomenon in itself. It was a sea of mostly white people, including just about every socioeconomic class (poor, rich, in between). Picture cowboy boots, MAGA hats, Trump tees and, yes, Kid Rock for Senate tees – but Kid Rock’s opener was a (black) soul group and Kid Rock even included DJ and rap segments as a nod to his upbringing in black, hip-hop culture. Even during these segments, the crowd was engaged and excited. A group that undoubtedly supports racists and bigots – either openly or with their spending dollars and private political votes – was entertained by a Notorious B.I.G track.

As much as I’d love to say that I hated the show and wish I hadn’t gone… it was, in fact, entertaining. From the moment Kid Rock hit the stage until the final encore performance, the stadium was booming with fireworks, strippers (yes, you read that correctly), and appearances from B-List celebrities like Uncle Cracker and Beavis and Butthead. I didn’t know a single Kid Rock song, had complete anxiety going into the concert, and still managed to enjoy the majority of the show. Something about Kid Rock’s ability to entertain even the biggest of doubters should re-enforce his ultimate job title: he’s simply an entertainer.

I recognize that humans are naturally complex – everything’s not black and white and clear as day. But I’m also willing to admit that we’re giving Kid Rock way too much credit. Just as we brushed off Kanye’s rant on Saint Pablo Tour as “he’s just being stupid Kanye,” we should also recognize that Kid Rock is doing what he does best: violate the status quo so much so that his stage name is plastered on every news headline. He’s an entertainer who recognizes the demographic of his followers and capitalizes on their viewpoints to make a few dollars on Kid Rock 4 Senate tees and snapbacks. If this stunt had happened, say, four years ago, there would be no Twitter conversation or protests over his shows opening the new Detroit stadium. Frankly, nobody would give a damn. But since the clown that is #NotMyPresident Trump has somehow leveraged his image to gain the presidency, we’re all uneasy about anyone with influence who uses that influence to encourage ultra-racists. If Kid Rock’s speech had been given anywhere else with any other audience, it wouldn’t have been as cringe-worthy. Now that I associate red caps and Trump tees with Nazis and KKK members, I automatically assume that anyone who is encouraging those individuals agrees with their viewpoints. If those individuals are scattered throughout the crowd and cheering for what Future-Senator Rock has to say – I’m immediately uncomfortable and I immediately view the rap star turned rock star as a racist himself.

Maybe that was  our mistake.

Where do we draw the line between crappy political exclamations and pure entertainment? Can this line be evenly drawn?

Find out on next week’s episode of Big World, Little Bria, alternatively pitched to E! as This Girl Had No Business Going To A Kid Rock Show Any Damn Way.

Side note: to make matters worst, I forgot to take photos but there was plenty of Snapchat/Instagram stories footage. Follow me there.