Meet Rookie Season: The R&B Duo with a Creative Knack for More Than Music

Rookie Season is the perfect blend of R&B and neo-soul. It’s nostalgic – imagine the music that your mom would blast on Saturday mornings to wake you up to clean. But, still current – as if the rhythm and soul legends of yester-year collectively had a millennial baby to relate to today’s musical ear. 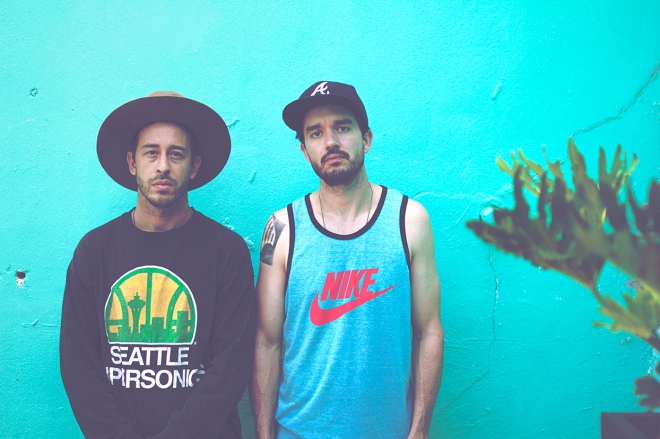 Now, picture Brad and Sanders: two guys who’d only met once before their first performance as a duo, but who bonded over all things urban culture – basketball, fashion and D’Angelo. If you let them tell it, the duo is so much more than just the music. They’re fashion enthusiasts that design their own merchandise. It’s worth noting that Rookie Season’s merch line could graphically compete with any streetwear brand. They’ve even conceptualized their own magazine. Rookie Season’s ability to combine their separate, individual ideas into a cohesive and innovative creation is more than admirable – it’s inspiring.

In the wake of their debut album, The Collide, I was stoked to learn more about their collaborative creative process and about the individuals behind the claymation duo (more on that later).

Get to know Rookie Season.

As a duo, the two of you had only met once in person prior to your first show together. How did you meet in the first place?

A mutual friend introduced us. We bonded over basketball, D’Angelo, and Kings of Comedy — immediate best friends.

While the two of you have clear, shared interests, is it difficult to create with two different minds working together at once?

Not at all. We give each other so much space to present ideas and be creative. That’s the key. You have to allow a safe space for creativity. You have to go into whatever you’re creating with the idea that there are no bad ideas. Then you weed out the bad ideas.

You have to go into whatever you’re creating with the idea that there are no bad ideas.

Your love for R&B is an obvious prominent influence in your music. What are some specific artists that provided the fuel for those first writing sessions?

I can sort of guess, but humor me: where does the name Rookie Season even come from?

It sort of encapsulates everything we love. This project is really us pursuing our favorite things, and that name fits the
pursuit.

Will the group name mean the same to you when you’re no longer in your “rookie season”?

We will always be “rookies.”

This group is clearly more than just a “singing duo” – there are so many creative forums that you’re venturing into. What is the process for deciding what to do next? Also, how is this creativity nurtured when you’re not together?

We let mostly everything happen organically. We’ve set some pretty clear goals, but we sort of let where we are at the moment dictate the next step. We’re in production on our new capsule collection right now. We’re pretty excited about the vibe. We’ve got a few other things in the works as well. As far as nurturing the creativity, we text a lot, and email each other ideas. We try to get in the same room pretty often, though. It’s always better to get an immediate reaction to something as opposed to waiting a few hours for an email reply.

Describe your style (whether fashion-wise, musically, or creatively in general) in three words.

Describe the creative process for the Backtalker visual. Was the clay-mation concept an idea that the two of you discovered first or was it presented to you by the video’s director?

The director, Azod Abedikichi or AZXD, is an “instagram famous” claymation artist and a really good friend of ours. We sent him some early mixes of the first two singles and he loved them. He immediately wanted to make a video. The concept was all him. We talked about it for months, and he kept coming up with these brilliant ideas and then changing them. He finally landed on this one, and we were all in. There was actually a casting call for the Barbies. He was so meticulous in his search for the right ones. That’s what makes him so good — the attention to detail. We’re excited that it’s finally getting out there.

My favorite track on the new album is its title track (The Collide).

It’s oddly nostalgic of the times my mom would blast music on Saturday mornings letting us know it was time to clean the house. It is very melodic, with a beautiful blend of the two of your voices. What was the process for the creation of this track?

Brad:  This is one of my favorite tunes as well.  It was one of the last songs completed for the record.  As a duo, we have a, kind of, back-and- forth for most of the tunes, but for this one, Sanders wrote and produced it after we decided to call the record “The Collide.” It gives inspiration and emotion to the rest of the record! On this one I got to just step back and enjoy!

Sanders: So, “The Collide” melody came first. I recorded it on a voice memo, and then constructed the song around it. First, I got Brad to send me a bunch of individual percussion all recorded to the same bpm. I just wanted him to put it on his phone so it would have that imperfect audio quality to it. I wanted it to sound raw. A lot of the percussion on the track is from Brad’s phone. I think I recorded guitar first. The song’s only 2 chords, so I locked down the template with guitar. Then I just started throwing all of the parts on — bass, piano, electric guitar, strings, and on and on. The vocals were all sort of scratch tracks
that ended up working. I had the main melody idea, but it’s really just riffing. There was really no arrangement to it. It all sort of fell where it fell, and I didn’t want to mess with it. Our buddy, Colin Killalea, mixed it, and he also used the strings and reconstructed them to make that killer wave sound at the end. It was really fun to make, and it definitely came from a very nostalgic place.

Rookie Season’s talent exceeds what they’re most known for, music, and bleeds into other important aspects of culture, including fashion and art. Their creative aptitude is exactly what Soul Culture aims to promote in such a saturated market.